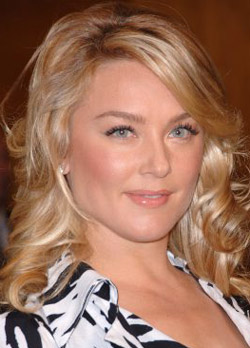 Elisabeth Rohm has joined the cast of an upcoming John Singleton’s thriller Abduction.

Yes, we do know that she’s a 37-year old actress, but that has nothing to do with her new role, since she’s going to play a mother of 18-year-old Taylor Lautner.

As you see, previously reported Emily Mortimer, is no longer part of this project, and Lautner just got himself a brand new mum!

Taylor Lautner is set to play a character named Nathan who “enters a world of adventure” after he finds his own baby pictures on a missing persons website, and by the way discovers that his parents may not be his real parents.

From that moment starts the part that sounds like Bourne-style thriller, including conspiracy, espionage and essentially running for his life.

Elisabeth Rohm, whose previous film appearances include Miss Congeniality 2: Armed and Fabulous, as well as a long-running role in Law And Order, will play Lautner character’s biological mother.

The rest of the cast includes Lily Collins as Nathan’s girlfriend, Maria Bello as his mother, Jason Isaacs as his father, Denzel Whitaker as his best friend, Alfred Molina as a dogged CIA agent who is one step behind, determined to bring the teenager in alive”, Sigourney Weaver as Nathan’s psychiatrist and Michael Nyqvist as the villain.

Abduction was recently bought for nearly $1 million by Lionsgate in a rare sale of a spec script (script that was written without any upfront studio commitment or commission) from newcomer Shawn Christensen and the movie is scheduled for a 2011 release. Stay tuned!