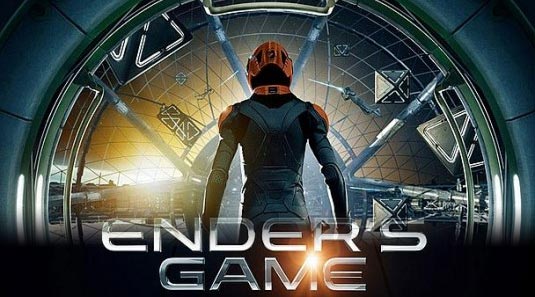 As promised with yesterday’s tease, the first poster for Summit Entertainment’s Ender’s Game highlights the massive scope of this sci-fi adaptation, based on Orson Scott Card’s novel. Asa Butterfield stars as Ender, who is recruited by the government to join the elite trainees at the Battle School, to help the humans win their ongoing war with alien forces known as the Formics. Gauge your eyes on the latest one-sheet for this upcoming sci-fi thriller below: Directed by Gavin Hood, Ender’s Game comes to theaters on November 1st, 2013 and also stars Harrison Ford, Abigail Breslin, Hailee Steinfeld, Ben Kingsley, Viola Davis, Moises Arias and Jimmy Pinchak. Here’s the synopsis for Ender’s Game

In the near future, a hostile alien race (called the Formics) have attacked Earth. If not for the legendary heroics of International Fleet Commander, Mazer Rackham (Ben Kingsley), all would have been lost. In preparation for the next attack, the highly esteemed Colonel Graff (Harrison Ford) and the International Military are training only the best young children to find the future Mazer. Ender Wiggin (Asa Butterfield), a shy, but strategically brilliant boy is pulled out of his school to join the elite. Arriving at Battle School, Ender quickly and easily masters increasingly difficult war games, distinguishing himself and winning respect amongst his peers. Ender is soon ordained by Graff as the military’s next great hope, resulting in his promotion to Command School. Once there, he’s trained by Mazer Rackham, himself, to lead his fellow soldiers into an epic battle that will determine the future of Earth and save the human race.

Take a look at the new high resolution poster below and let us know what you think.

Two New Posters For THE WOLVERINE
WHITE HOUSE DOWN Teaser Posters; Trailer Out on Tuesday
Advertisement