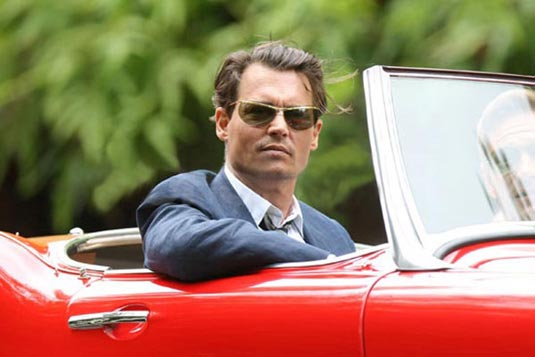 I’m sure you’re all excited about The Rum Diary project, and not (just) because Johnny Depp stars in it, so you’ll be glad to learn that FilmDistrict will release Bruce Robinson‘s movie on October 28, based on the early Hunter S. Thompson novel that was ultimately published in 1998.

The Rum Diary has quite interesting cast on board, which also includes Aaron Eckhart, Amber Heard, Michael Rispoli, Richard Jenkins and Giovanni Ribisi.

So, this project tells the increasingly unhinged story of itinerant journalist Paul Kemp (Depp). Tired of the noise and madness of New York and the crushing conventions of late Eisenhower-era America, Kemp travels to the pristine island of Puerto Rico to write for a local San Juan newspaper run by the downtrodden editor Lotterman (Jenkins).

Adopting the rum-soaked lifestyle of the late ‘50s version of Hemingway’s “The Lost Generation,” Paul soon becomes entangled with a very attractive American woman, Chenault (Heard) and her fiancée Sanderson (Eckhart), a businessman involved in shady property development deals. It is within this world that Kemp ultimately discovers his true voice as a writer and integrity as a man.

The Rum Diary is produced by Infinitum Nihil, the production company headed by Depp and Christi Dembrowski, along with Graham King and Tim Headington. Anthony Rhulen and Robert Kravis also produce.

Graham King, producer and FilmDistrict co-founder looks quite satisfied with this involvement, since he revealed:

“Hunter S. Thompson became close with Johnny Depp during the filming of “Fear and Loathing in Las Vegas” and showed Depp the unpublished manuscript for “The Rum Diary”. I am extremely proud to bring this novel to film and to honor Hunter’s legacy.”