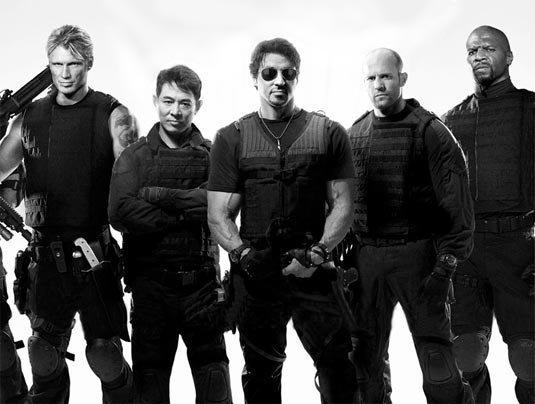 The final poster for Sylvester Stallone’s actioner The Expendables has arrived online courtesy of JoBlo. The Expendables is a hard-hitting action/thriller about a group of mercenaries hired to infiltrate a South American country and overthrow its ruthless dictator. Once the mission begins, the men realize things aren’t quite as they appear, finding themselves caught in a dangerous web of deceit and betrayal. With their mission thwarted and an innocent life in danger, the men struggle with an even tougher challenge—one that threatens to destroy the band of brothers. The Expendables is directed and written by Sylvester Stallone and the stellar cast includes, as well as Stallone, Jason Statham, Jet Li, Terry Crews, Randy Couture, Dolph Lundgren, Mickey Rourke, Giselle Itie, Eric Roberts, David Zayas, Steve Austin, Bruce Willis and even Arnold Schwarzenegger. The Expendables opens to theaters August 13, 2010. In case you haven’t already watched it, check out The Expendables trailer #1 and trailer #2.