Connect with us
Warner Bros. has released the first trailer for Todd Phillips‘ new comedy Due Date which stars Robert Downey Jr. and Zach Galifianakis where Downey races home in hopes of arriving before his wife delivers their first child but he takes on a mismatched traveling companion. 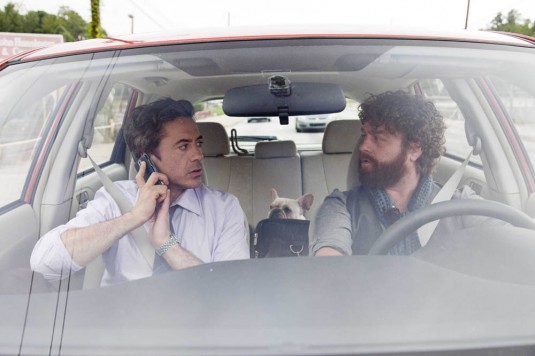 Robert Downey Jr. and Zach Galifianakis in Due Date Peter Highman (Robert Downey Jr.) is an expectant first-time father whose wife’s due date is a mere five days away. As Peter hurries to catch a flight home from Atlanta to be at her side for the birth, his best intentions go completely awry when a chance encounter with aspiring actor Ethan Tremblay (Zach Galifianakis) forces Peter to hitch a ride with Ethan – on what turns out to be a cross-country road trip that will ultimately destroy several cars, numerous friendships and Peter’s last nerve. Maybe that’s the reason why the movie has already been described as John Hughes‘ Trains, Planes & Automobiles meets The Hangover by Todd Phillips. The movie written by Alan R. Cohen & Alan Freedland and Adam Sztykiel & Todd Phillips also stars Jamie Foxx, Michelle Monaghan and Alan Arkin. Due Date is scheduled to be released on November 5, 2010.