A Good Day to Die Hard, the fifth film in the Die Hard franchise gets its first trailer later this week. In anticipation of this event, the first official image has been released. Spartacus’ star Jai Courtney is next to Bruce Willis in the role of McClane’s all-grown-up kid, Jack McClane in the mission that takes them to Russia, where Courtney says his fictional father will continue to be ‘a fish out of water.’ Courtney told the magazine:

That’s the thing about the ‘Die Hard’ franchise, John’s always a fish out of water. What could be further out of water for him than Russia The relationship isn’t always functional. These are two guys who have been estranged for some time. John likes to wing it, see what happens. Jack’s more of a strategist.

Well, things are getting even more complicated as director John Moore previously revealed that the flick includes a car chase sequence that took them 78 days to shoot and cautioned that fans shouldn’t expect ‘corny jokes’ this time. Die Hard 5 opens on Valentine’s Day and also stars Sebastian Koch, Yulia Snigir, Cole Hauser, Amaury Nolasco, Megalyn Echikunwoke, and Anne Vyalitsyna. Check out the image of the father-son duo, loaded for war. 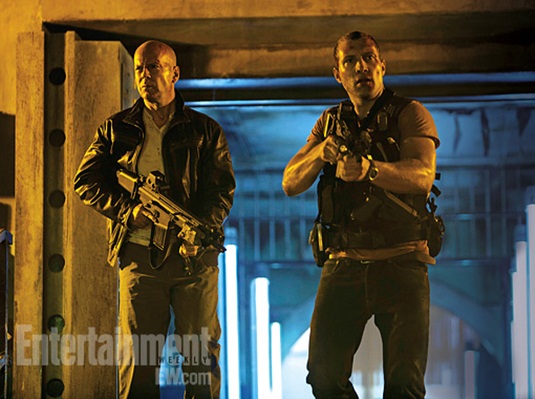 Red Band Trailer For MOVIE 43 Is Here!
Photo of Oprah Winfrey and Terrence Howard in Lee Daniels’ THE BUTLER
Advertisement