Connect with us
Sony Pictures has finally premiered the first theatrical trailer for David Fincher‘s Facebook movie, The Social Network. 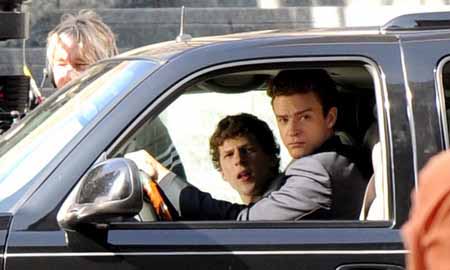 We had a chance to see two teaser trailers (the first and the second) until now. But check out this first and also great trailer for the movie below. The film will focus on the evolution of Facebook from its 2004 creation on the Harvard dorm where Mark Zuckerberg and his roommates created the immensely-popular social networking website with more than 200 million members. Jesse Eisenberg stars as Facebook CEO Mark Zuckerberg. Justin Timberlake stars as Sean Parker, the Napster co-founder who became Facebook’s founding president and Andrew Garfield plays Eduardo Saverin, the Facebook co-founder who fell out with Zuckerberg over money. The upcoming movie about the founders of Facebook directed by Fincher from a screenplay by Aaron Sorkin also stars Rashida Jones, Joseph Mazzello, Brenda Song, Rooney Mara and Max Minghella. The Social Network will open theaters on October 1st, 2010.