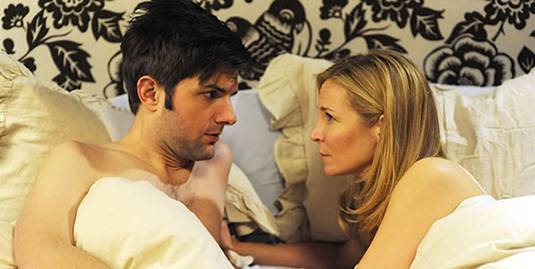 The first trailer has gone online for romantic comedy Friends with Kids, and gladly, it brings back together Bridesmaids quartet Kristen Wiig, Jon Hamm, Chris O’Dowd and Maya Rudolph.

The film follows a group of friends in their thirties, two of whom (Jennifer Westfeldt and Adam Scott portraying Julie and Jason) decide that they ought to get together for one night only to create the baby, but without the red tape of getting married and being in love with one another. Things get complicated, of course. Unfortunately, it doesn’t look half as edgy as Bridesmaids was, although the presence of fantastic half the cast of Bridesmaids does at least look set to offer a few laughs along the way. So if you haven’t already guessed where exactly the story is going to go from the trailer below and it’s not so easy to characterize exactly what a plot is even if romance comes to pass under your very noses, then you’re not thinking hard enough yet. Directed and written by the endearing Jennifer Westfeldt herself, Friends with Kids will open in the US on March 9th, 2012. Take a look at the Lionsgate Films trailer below.