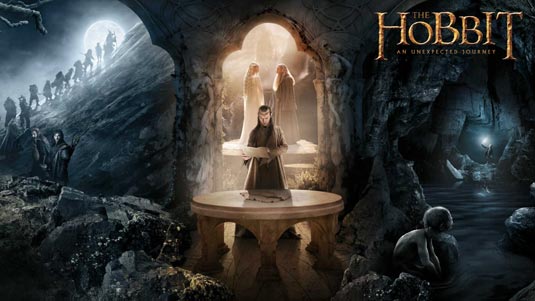 All of you Tolkien fans know that Bilbo Baggins is the focus of the journey through Middle Earth known as The Hobbit, but in Peter Jackson‘s trilogy, Bilbo’s nephew Frodo won’t be absent either. We’ve known for a while now that Elijah Wood would be reprising his role as Frodo Baggins in the films, and he even popped up in one of the many video blogs Jackson has been posting from the set. But now (thanks to a Brazilian site) we’ve got our first official look at Frodo back in action, as well as four other stills from the film. Check them out below:

Don’t get too excited about this Frodo sighting, though – rumor has it he will appear in a frame story just to kick things off and link the actions of The Hobbit to The Lord of the Rings. But then again, now that there are three Hobbit movies to come, maybe they have managed to find more room for Frodo. The Hobbit: An Unexpected Journey is set for release on December 14th, 2012 and believe it or not, has managed to snag that entire release date for itself. You don’t mess with Peter Jackson, eh? The film also stars Martin Freeman, Hugo Weaving, Ian McKellen, Cate Blanchett, Evangeline Lilly, Orlando Bloom, Richard Armitage, Christopher Lee, Andy Serkis, Ian Holm, Benedict Cumberbatch and others. Are you excited for The Hobbit as much as you were for The Lord of the Rings?
Continue Reading
Advertisement
You may also like...
Related Topics:Andy Serkis, Benedict Cumberbatch, Cate Blanchett, Christopher Lee, Elijah Wood, Evangeline Lilly, Hugo Weaving, Ian Holm, Ian McKellen, Lord of the Rings, Martin Freeman, Orlando Bloom, Peter Jackson, Richard Armitage, The Hobbit, The Hobbit: An Unexpected Journey, The Lord of the Rings