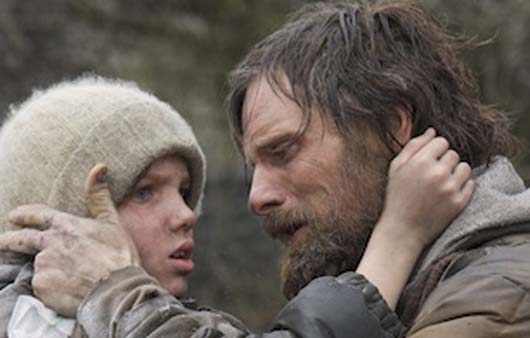 Academy Award nominee Viggo Mortensen, Academy Award winners Robert Duvall and Charlize Theron, Guy Pearce and 12-year-old Kodi Smit McPhee star in the big-screen adaptation of Cormac McCarthy’s best-selling, Pulitzer Prize-winning novel “The Road.” Take a look at these five clips from the movie directed by John Hillcoat from a script by Joe Penhall, which is showing at Telluride this weekend and at Venice Film Festival In Competition. This is a story of a man (Viggo Mortensen) and his son (Kodi Smit-McPhee) walk alone through burned America. Nothing moves in the ravaged landscape save the ash on the wind. It is cold enough to crack stones, and, when the snow falls it is gray. The sky is dark. Their destination is the coast, although they don’t know what, if anything, awaits them there. They have nothing: just a pistol to defend themselves against the lawless bands that stalk the road, the clothes they are wearing, a cart of scavenged food and each other. After delaying the film for more than a year, “The Road” is scheduled to hit theaters on October 16th 2009. “The Road” Clip #1 “The Road” Clip #2 “The Road” Clip #3 “The Road” Clip #4 “The Road” Clip #5
Continue Reading
Advertisement
You may also like...
Related Topics:Charlize Theron, Cormac McCarthy, Guy Pearce, John Hillcoat, Kodi Smit-McPhee, Robert Duvall, The Road, Viggo Mortensen

“Leslie, My Name Is Evil” Trailer
“Clash of the Titans” Behind The Scene
Advertisement