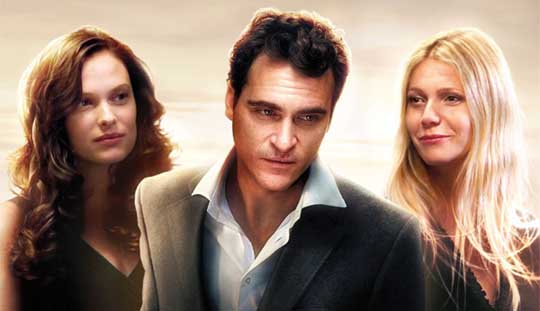 The second trailer for the romance/drama “Two Lovers,” starring Joaquin Phoenix, Gwyneth Paltrow and Vinessa Shaw has been released. Phoenix reunites for the third time with director James Gray. The two have collaborated on “The Yards” and “We Own the Night.” “Two Lovers” is a romantic drama set in New York City. It tells the story of Leonard (Joaquin Phoenix), an attractive but depressed young man who moves back in with his parents following a recent heartbreak. An aspiring photographer, Leonard works part-time at his father’s dry-cleaners. His concerned parents try to set him up with Sandra (Vinessa Shaw), the sweet and caring daughter of a close family friend. A big family dinner serves as their introduction and Leonard arranges to see her again. Then late one night Leonard looks out his bedroom window and notices a ravishing young woman he’s never seen before. Michelle (Gwyneth Paltrow) recently moved into an apartment in his family’s building – an apartment paid for by the wealthy married man she’s seeing. “Two Lovers” will hit the theaters on January 9th, 2009.
Continue Reading
Advertisement
You may also like...
Related Topics:Gwyneth Paltrow, James Gray, Joaquin Phoenix, Two Lovers, Vinessa Shaw