Harry Elfont and Deborah Kaplan (the duo behind Leap Year) have been hired to adapt Men Are From Mars, Women Are From Venus for Summit Entertainment. Satisfied with the news? The upcoming franchise will of course, be based on the book series written by John Gray. Since it was published in 1992, there have been no romantic comedies dealing with the many differences between men and women. That’s why folks from Summit are quite happy with this deal. Erik Feig, Summit’s President of Production, stated: “Men Are From Mars, Women Are From Venus is not just the title of a book, or what we know will become an amazing film and TV franchise – it is a pop cultural mainstay and comically, sadly, romantically, all too often still true these many years after first being published. We are thrilled to have the opportunity to work on a franchise whose name everyone knows and whose reality everyone lives!” Elfont and Kaplan previously directed the uber-90’s films Can’t Hardly Wait and Josie and the Pussycats, but when it comes to Men Are From Mars, Women Are From Venus, at this moment there’s still no word about the possible director. Interested in this one? 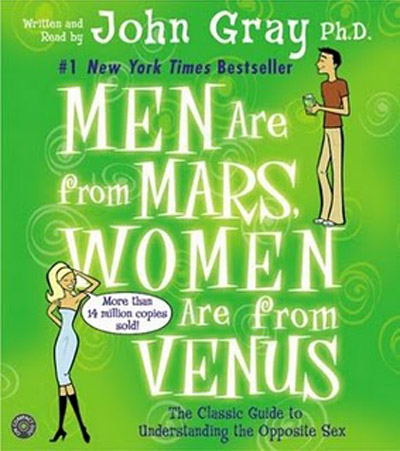 Continue Reading
Advertisement
You may also like...
Related Topics:Men Are From Mars Women Are From Venus

Dane DeHaan Joins The Wettest County in the World
Mark Waters to Direct Beatles Time-Travel Comedy Get Back?
Advertisement