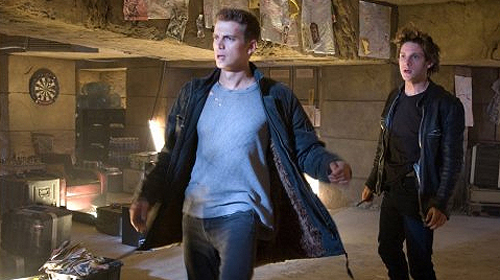 Hayden Christensen revealed that there are talks about a sequel  ”Jumper.” “We’re talking about it,” Christensen tells Sun Media about filming a sequel to  his sci-fi action movie,”Jumper.” “I know that they’re having those conversations, I hear about them,” Christensen says of development plans for Jumper 2. When asked if he would indeed reprise his role, he offered, “Oh yeah, and I think I probably will.” Doug Liman originally planned a movie trilogy based on Steven Gould‘s novel. Liman spun out a liberal re-imagining of Gould’s more personal story about child abuse, which had jumping as a metaphor for escape. “It was set up to become that, a trilogy, if it did well,” says Christensen. “And I think they’re happy with how it did so they want to make another one. But I don’t think they’re rushing to get into production.”
Continue Reading
Advertisement
You may also like...
Related Topics:Doug Liman, Hayden Christensen, Jumper