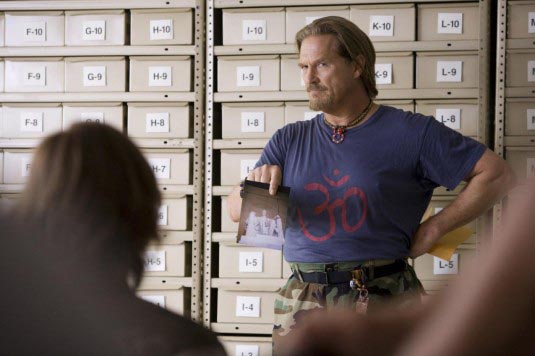 After you saw great trailer and photos from the movie you must watch this really funny clip from the “The Men Who Stare at Goats,” which stars George Clooney, Ewan McGregor, Kevin Spacey, Jeff Bridges, Rebecca Mader and Terry Serpico. Grant Heslov directed the dark comedy – based on the 2004 book of the sam name by the Guardian columnist Jon Ronson – from the script written by Peter Straughan (”How to Lose Friends & Alienate People”). “The Men Who Stare at Goats” is set in Iraq and centers on Bob Wilton (Ewan McGregor), a desperate reporter who stumbles upon the story of a lifetime when he meets Lyn Cassady (George Clooney), who claims to be a former secret U.S. military psychic soldier. Plot summary: Reporter Bob Wilton (Ewan McGregor) is in search of his next big story when he encounters Lyn Cassady (George Clooney), a shadowy figure who claims to be part of an experimental U.S. military unit. According to Cassady, the New Earth Army is changing the way wars are fought. A legion of “Warrior Monks” with unparalleled psychic powers can read the enemy’s thoughts, pass through solid walls, and even kill a goat simply by staring at it. Now, the program’s founder, Bill Django (Jeff Bridges), has gone missing and Cassady’s mission is to find him. Intrigued by his new acquaintance’s far-fetched stories, Bob impulsively decides to accompany him on the search. When the pair tracks Django to a clandestine training camp run by renegade psychic Larry Hooper (Kevin Spacey), the reporter is trapped in the middle of a grudge match between the forces of Django’s New Earth Army and Hooper’s personal militia of super soldiers. In order to survive this wild adventure, Bob will have to outwit an enemy he never thought possible. The Men Who Stare at Goats was inspired by Jon Ronson’s non-fiction bestseller of the same name, an eye-opening and often hilarious exploration of the government’s attempts to harness paranormal abilities to combat its enemies. The Men Who Stare at Goats premiered at the Venice Film Festival and will hit theaters on November 6th 2009.
Continue Reading
Advertisement
You may also like...
Related Topics:Ewan McGregor, George Clooney, Grant Heslov, jeff bridges, Kevin Spacey, The Men Who Stare At Goats

First “Up in the Air” Trailer
Fish Tank Trailer
Advertisement