Connect with us
Well, one thing is for sure, now we know why an upcoming Seth Gordon’s comedy Horrible Bosses has this kind of title! 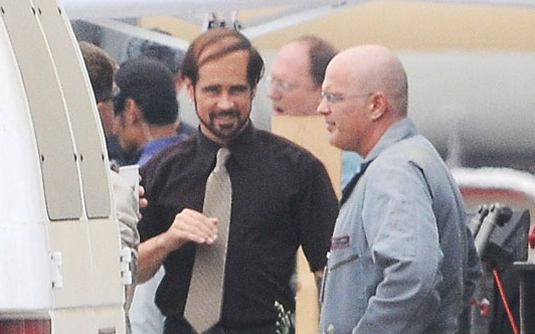 Colin Farrell, Horrible Bosses Colin Farrell, one of the tyrant bosses, definitely looks horrible! But this is a completely different type of boss, something we thought could never happen with this actor, and, although this new Colin Farrell shocked (and scared a little bit) us, we like him even more now! While you’re “enjoying” these “lovely” pics, let us remind you that this project is already described as “a dark, in-the-workplace comedy” or if you prefer, the movie is based around three friends who conspire to kill their bosses. Frustrated by their jobs are Jason Sudeikis, Jason Bateman and Charlie Day. Lovely (but let’s wait to see her pics first!) Jennifer Aniston and Colin Farrell are two of the offending office tyrants, while Jamie Foxx is a colorfully named scam artist who dishes killing advice to the three regular guys. And that’s not the end of this great cast, because we also have Kevin Spacey, who will have an honor to play the worst of the bosses, or, as they describe him “a master manipulator with an attractive wife.” Seth Gordon is directing from the script of Jonathan Goldstein and John Francis Daley. Brett Ratner and Jay Stern are producing. Horrible Bosses is currently slated to hit theaters on July 29, 2011. Don’t miss another “horrible” look guys, stay tuned!
Continue Reading
Advertisement
You may also like...
Related Topics:Charlie Day, Colin Farrell, Horrible Bosses, Jamie Foxx, Jason Bateman, jason sudeikis, Jennifer Aniston, Kevin Spacey, Seth Gordon