I know you’re already familiar with Jennifer Lawrence‘s new role in House at the End of the Street so I’m sure you’re going to enjoy in this first image from the whole thing. She looks kind of scared, surprised, or something like that, but it’s logical because we’re actually talking about a completely new horror-thriller. As you already know, the movie comes from director Mark Tonderai and the rest of the cast looks great as well. Elisabeth Shue and Max Thieriot also star in a story which follows newly divorced Sarah and her daughter Elissa find the house of their dreams in a small, upscale, rural town. But when startling and unexplainable events begin to happen, Sarah and Elissa learn the town is in the shadows of a chilling secret… It’s not hard to guess that Lawrence stars as Elissa while Shue plays her mom, character which director Tonderai described as “…a mother who was always out on the road with her husband taking drugs and getting drunk. When she cleaned up and they got divorced, she was always out working. Suddenly, she thinks she wants to engage and be a parent, but at this point her daughter is becoming a woman and has been left to herself for a long time. She rejects these overtures of motherly love.” House at the End of the Street opens on September 21st, 2012. Let us know what you think about Lawrence’s new look and stay tuned for more! 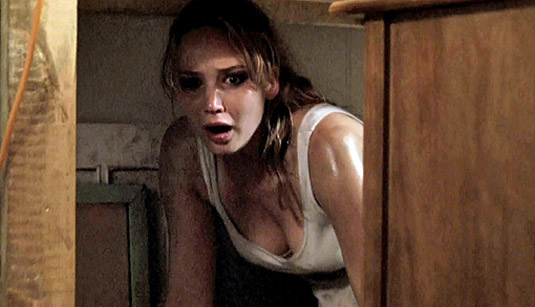 Continue Reading
Advertisement
You may also like...
Related Topics:Elisabeth Shue, House at the End of the Street, Jennifer Lawrence, Mark Tonderai, Max Thieriot

46 THE HUNGER GAMES Photos!
First Look at Will Ferrell and Zach Galifianakis in THE CAMPAIGN; New Plot Details
Advertisement