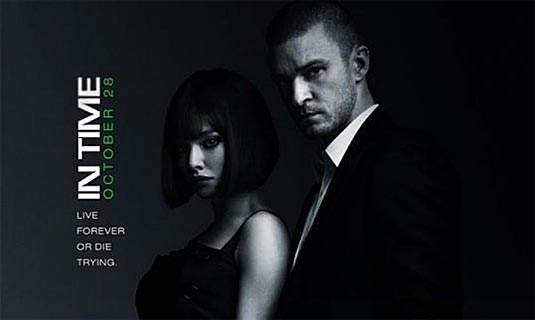 Here are the new extended Comic-Con trailer and 3 posters for “In Time” sci-fi thriller, starring Justin Timberlake, Amanda Seyfried, Cillian Muphy, Alex Pettyfer, and Olivia Wilde. In the not-too-distant future the aging gene has been switched off. To avoid overpopulation, time has become the currency and the way people pay for luxuries and necessities. The rich can live forever, while the rest try to negotiate for their immortality. A poor young man who comes into a fortune of time, though too late to help his mother from dying. He ends up on the run from a corrupt police force known as ‘time keepers’. In Time, directed by Andrew Niccol (Lord of War, Gattaca) comes to theaters October 28th, 2011.