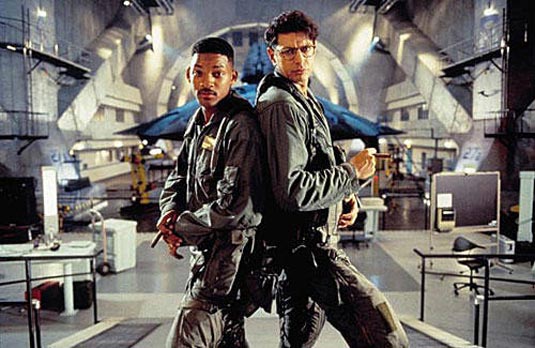 As we wrote recently, Roland Emmerich is trying to develop a sequel to Independence Day. Producer Dean Devlin recently revealed he was working on the project with Emmerich, and in a recent brief interview with ComingSoon.net he gave a little update on how things are going. When asked if the movie was going to happen he said,

“I hope so, I can’t say that it’s going to happen, but I can say for the first time that for the first time in eleven years, Roland Emmerich and I are working together. There are a lot of moving pieces that are coming together. I don’t know if it will come together, but we want it to happen. This is the first time since we made the original that Roland and I are excited about doing it and feeling like we have the right idea and we have our fingers crossed.”

He goes on to talk about the pressure to develop a sequel to the 1996 sci-fi action film:

“We felt enormous pressure. Over the years everyone has always asked us about it. We never wanted to do it unless it felt germane to the story. In fact, ten years ago I was hired to write a sequel to ‘Independence Day’ and they paid me a lot of money. After I finished the script, I gave the money back and I said, ‘Don’t even read the script. The script is okay, but we can’t make an okay sequel to Independence Day.’ This is what gave me a career. The fans deserve better than this. And I really decided then that I was never going to do a sequel. Until about a year and a half ago when Roland called me up and said, ‘Let’s try again.’ So we went out to Palm Springs and we cracked it. We said, ‘That’s a real sequel. That’s a sequel that makes sense to do. That’s a sequel that won’t disappoint the fans. That one feels like we always intended to do that in the first place.’ So I want it to happen. I don’t know if it will.”

Although I myself am not a fan of ‘disaster flicks’, I gotta hand it to him for the integrity and not wanting to do a crappy sequel just to rip off the fans. The fact that he wrote the script and gave the money back says a lot about how they feel about this franchise. The original Independence Day will be getting a 3D re-release on July 3rd, 2013. I just might go and see it, if nothing else – to look at the White House going down. If they have a great story, I wouldn’t mind seeing where they take it! What about you?
Continue Reading
Advertisement
You may also like...
Related Topics:Dean Devlin, Independence Day, Roland Emmerich