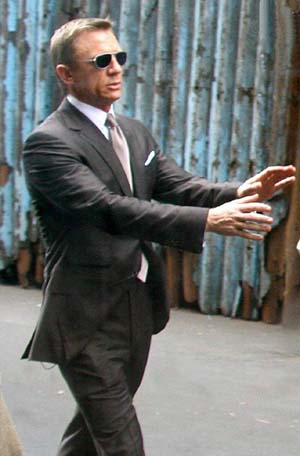 The 39-year-old actor found himself at the centre of a deadly gun battle after movie crews upset a fragile truce between rival mobsters. Police guarding the star have already “taken out” one gangster in a hail of bullets. And that led to an explosion of violence that has left dozens injured. While the stars try to film death-defying action scenes, they are also having to brave genuine gun battles on the streets of Panama. The amazing scenes of violence in Panama City were kicked off by rioting gangsters who are battling for control of protection rackets surrounding 22nd Bond film Quantum Of Solace. Now movie insurers are so worried about the danger facing the stars that they may order makers to suspend filming and completely rewrite the script to get them out alive. A source on the film’s set said: “It’s a war zone out there. There are literally hundreds of masked people taking to the streets. We’re having to film between protests and riots. It’s so dangerous.” “The police warned the city’s gangs to stay away from the film set while crew were making the movie.” They’ve been given permission to shoot on sight anyone thought to be trying to harm the crew. Officers shot dead “union member” Al Iromi Emoir Smith Renterìa. But now they’ve killed that young man, the people are fighting back” source said. A representative of EON Productions, which makes the Bond films, insisted that the crew were being well protected and said plans were afoot to get the filming back on track. He said: “We hope that filming should be able to go ahead as normal from now on. None of the cast have been harmed.” “If things get any worse, they may have to put the project on hold and rewrite scenes so that they allow for a change of location – then move back to civilisation as soon as possible.” Makers are desperate to travel on to Italy, where they plan to film a classic Bond car chase featuring 150mph supercars. It’s also been recently reported that Amy Winehouse will pen and sing the new James Bond theme song. But only if Amy stays off drugs the next two months! A source says: “That’s when the Bond people make a final decision on who sings the theme. If Amy is clean then, it’s hers.”
Continue Reading
Advertisement
You may also like...
Related Topics:James Bond, Quantum of Solace