Connect with us
This actor is probably best known from titles like Clash of the Titans, Kick-Ass and Lock, Stock, and Two Smoking Barrels and today we’re here to add his name to quite interesting (and previously reported) Matthew Vaughn’s X-Men: First Class cast list. 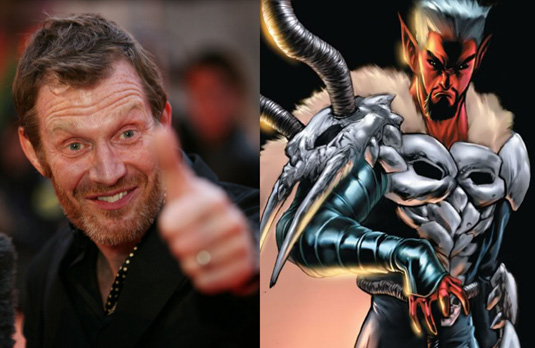 So, one big welcome for Jason Flemyng who will portray Nightcrawler’s father Azazel, a character that he already described as “a teleporter.” Here’s a little detailed description of this character: “Azazel claims that many years ago an ancient horde of demonic mutants from biblical times called the Neyaphem were in an epic battle with a group of angelic over-zealous mutants, named the Cheyarafim. They were victorious in the battle and vanquished the “evil” mutants to an alternate dimension for all eternity. The Neyaphem’s leader, Azazel, was the only one who was able to breach the dimensional void for brief periods of time due to his teleportation powers. His only hope to return to earth was by impregnating women because his children are linked to his dimension. Azazel has the ability to teleport across interdimensional distances, generate bolts and streams of paralyzing energy, as well as destructive energy which causes a form of disintegration, and can disguise his appearance. In addition to this, he and all other Neyaphem are negatively affected by the healing blood of the Cheyarafim which causes their body to begin to break down. Azazel also has the ability to mentally control the reptilian Firedancers that inhabit the brimstone dimension, and has a great knowledge of ancient magic.” On the other hand, Flemyng revealed that: “Matthew showed me my costume just the other day. Now I swore I’d never be in heavy make-up again, but this role is going to involve it. But at least they said, ‘Don’t worry, we’ll add the tail in post.’ I am Azazel, and I can teleport by waving my arms”. Let us remind you that he joins a cast that includes James McAvoy as Charles Xavier, Michael Fassbender as Erik Lensherr, Alice Eve as Emma Frost, Nicholas Hoult as Henry McCoy, Caleb Landry Jones as Sean Cassidy, Jennifer Lawrence as Mystique, Lucas Till as Alex Summers, Edi Gathegi as Darwin, and Kevin Bacon as their enemy. X-Men: First Class opens on June 3, 2011.
Continue Reading
Advertisement
You may also like...
Related Topics:Alice Eve, Caleb Landry Jones, James McAvoy, jason flemyng, Jennifer Lawrence, Kevin Bacon, Lucas Till, Matthew Vaughn, Michael Fassbender, Nicholas Hoult, X-Men: First Class

Rooney Mara is Lisbeth Salander in The Girl With The Dragon Tattoo
Shia LaBeouf in John Hillcoat’s Triple Nine?
Advertisement