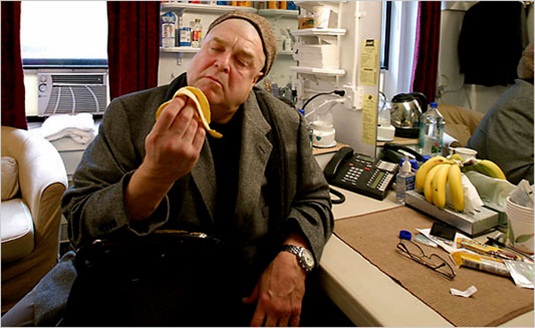 John Goodman (The Big Lebowski) and comedian Eric Andre (The Invention of Lying) have joined the cast of Shawn Levy‘s Twentieth Century Fox comedy The Internship that includes Vince Vaughn and Owen Wilson. Goodman ‘will cameo as Vaughn and Wilson’s ultimate boss, while Andre will play an advisor who mentors the duo.’ As you might know Vaughn and Wilson star as ‘old school salesmen who, finding themselves suddenly unemployed and passed-by in the digital world, try to reinvent themselves by becoming interns at a major tech company, despite knowing little about technology.’ Goodman has a lot of films over the coming months as he plays Ben Affleck’s Hollywood hookup in Argo, and he will play a friend to the pilot portrayed by Denzel Washington in the Robert Zemeckis-directed Flight; then Robert Lorenz’s baseball drama Trouble with the Curve and the Coen brothers’ folk music film Inside Llewyn Davis, and he will also return to voice Sully in Monsters University and appears in Focus/LAIKA’s ‘ParaNorman. Andre, who recently appeared on TBS’ last night show ‘Conan can next be seen on ABC’s ‘Don’t Trust the B– in Apt. 23; thesp also hosts talk show ‘The Eric Andre Show’ which is a part of the Adult Swim lineup on Cartoon Network.