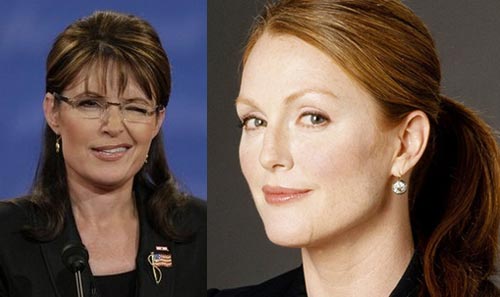 Last month we reported that Jay Roach is going to direct an upcoming HBO movie titled Game Change. So, you already know that it will be based on Mark Halperin and John Heilemann‘s 2010 bestseller of the same name, right?

But what you don’t know is that this movie will have some interesting cast! According to the latest reports, Julianne Moore is set to star as the former Alaska governor Sarah Palin.

As we previously reported, Danny Strong is in charge for this adaptation, which is definitely not surprise, because both Roach and Strong previously worked together on HBO’s “Recount”, about the disputed 2000 election so it makes a lot of sense.

Now, with Game Change we’ll have a chance to go behind the scenes of the long and captivating campaigns of Barack Obama, Hillary Clinton and John McCain and Sarah Palin.

And now, take a look at the description:

“In 2008, the presidential election became blockbuster entertainment. Everyone was watching as the race for the White House unfolded like something from the realm of fiction. The meteoric rise and historic triumph of Barack Obama. The shocking fall of the House of Clinton – and the improbable resurrection of Hillary as Obama’s partner and America’s face to the world.

The mercurial performance of John McCain and the mesmerizing emergence of Sarah Palin. But despite the wall-to-wall media coverage of this spellbinding drama, remarkably little of the real story behind the headlines had been told – until now.

Now, with Moore on board, it will be interesting to see the rest of the cast. You know – Obama, Clinton, McCain… If you have any thoughts, feel free to share it with us!