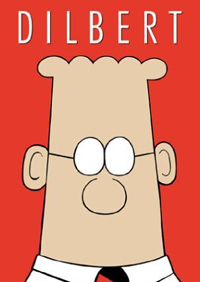 “I did nothing today, and still got paid,” oh yes, you’re going to love this news! Phoenix Entertainment is spearheading a new film based off the comic strip Dilbert, and Ken Kwapis, the guy who was in charge for He’s Just Not That Into You, is attached to direct the whole thing. At this moment, the only thing we know, beside Kwapis’ name involved, is that Phoenix Entertainment is producing with Intrigue Entertainment, but there’s still no one attached to star in the film. So, Dilbert is well-known comic strip written and drawn by Scott Adams. Dilbert began as a syndicated comic strip in 1989 and continues to run to this day. It was previously adapted into an animated series on UPN in 1999 with Daniel Stern voicing the titular lead and Chris Elliott providing the voice of Dogbert. Ok, I already hear you say – boooring, but, c’mon, who doesn’t like good satirical office humor? Especially when we have that crazy engineer as the title character. The popularity of the comic strip within the corporate sector has led to the Dilbert character being used in many business magazines and publications. The strip has spawned several books, an animated television series, a computer game, so we guess this is (finally) the right moment for Dilbert big-screen adaptation! And with some good cast, this could actually be something interesting, why not? On the other hand, Kwapis’ previous credit involves directing He’s Just Not That Into You, Sisterhood of the Traveling Pants and the upcoming groundbreaking Everybody Loves Whales. He has also directed numerous episodes of the award winning sitcom The Office, so again – why not?
Continue Reading
Advertisement
You may also like...
Related Topics:ken kwapis