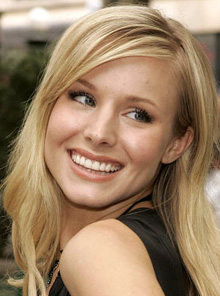 If you’re not so familiar with Ken Kwapis‘ new project titled Whales, then we’re here today to tell you it’s an upcoming drama movie with lovely Drew Barrymore and John Krasinski. And that’s not all! The Forgetting Sarah Marshall star, 29-year-old actress Kristen Bell is in negotiations to join them! Whales tells the true story of “a news reporter and a charity worker who must manage tensions between Russia and the US to free a group of whales trapped under ice in the Arctic Circle.” The movie is based on the book Freeing the Whales: How the Media Created the World’s Greatest Non-Event, and, as we mentioned, Ken Kwapis, man who was in charge for He’s Just Not That Into You is attached to direct it. Tim Bevan, Liza Chasin and Eric Fellner are due to work on production alongside Steve Golin and Michael Sugar from Anonymous Content. And, as you already guess, John Krasinski will play a small town news reporter, Drew Barrymore stars as a Greenpeace volunteer, while Kristen Bell will portray a journalist from Los Angeles who plays on her good looks to create a story. Bell as LA reporter who believes her appearance is her biggest asset? Ok, that does sound like a perfect role! And for all Bell’s fans out there, she will next be seen co-starring with Betty White and Sigourney Weaver in You Again, which will hit theaters this September, and in musical drama Burlesque with Cher and Christina Aguilera, due for release in December 2010.
Continue Reading
Advertisement
You may also like...
Related Topics:Drew Barrymore, John Krasinski, ken kwapis, Kristen Bell