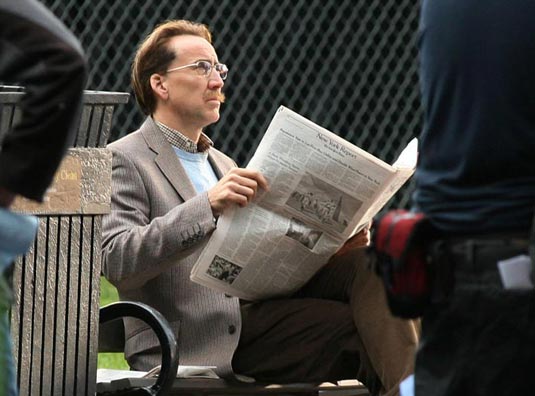 Filming for the Matthew Vaughn-directed “Kick-Ass” has begun on Saturday, September 6, in London and the comic’s writer Mark Millar has just returned from the London set with a full report about this highly anticipated adaptation and photos of Nicolas Cage in the lead role. Here is what he had to say:

Holy f*ck. We are all going to… a) Hell b) Prison c) Both. But it’s worth it, believe me. If I absolutely have to go to jail for a comic-book movie then I accept no substitutes. This is the one. I hereby declare Kick-Ass as the greatest movie of 2009. And if you think that I WOULD so that as co-creator and a producer on the movie you’re absolutely, one hundred percent correct. But as the months roll by and the trailers start to dribble online and you see what I just saw this weekend your heart will be beating that little bit faster too. I lucked out with Wanted and Timur and James and Angelina. But nothing– I mean nothing– can prepare you for Nic and Chloe as Big Daddy and Hit-Girl. As I said to Nic after the first scene was shot on Saturday morning, this is a movie about comic-book guys MADE by comic-book guys. We are absolutely in our comfort zone here and doing something really special. Cage’s eyes just gleamed. He said it’s the most excited he’s been by a role in a long time. And it shows. Screen-writer Jane Goldman and I were wearing out headsets and watching the monitor from early morning until we wrapped early evening both days, giggling at every line. Nobody knows this script better than me, Jane and director Matthew Vaughn, but we genuinely laughed at every take because these two actors just kept bringing something new to it. Coincidentally, the first scene shot on the movie was the first scene I wrote on the comic (now the opening to issue six) and it’s Hit-Girl in her secret identity, wearing a Hello Kitty T-shirt and a kevlar vest as her Dad pumps round after round into her chest so she knows how a bullet feels. I loved the scene in the comic, I loved the scene in the screenplay, but Nic just took it to a whole new level with his delivery, the genuinely mental glee and beautiful comic timing as we see this little kid in pink clothes and a pink hat blasted back into mud in an abandoned factory. The scene in the swing park the following day is even better, but I don’t want to spoil anything. All I’ll say is that nobody is going to be prepared for this movie when it opens late Summer 09. Nobody is going to have seen anything like this before and that’s very, very exciting. You heard it here first: Chloe Moretz is going to be a superstar after this picture. There are so many great actors and characters running around here, but this kid is just spectacular. I hung out with she and her Mum and older brother all day yesterday and she’s brilliantly unaffected by it all, switching from cute as a button eleven year old to potty-mouthed sociopath the moment Matthew yelled action. I have already nicknamed her Han Solo because she’s going to be the one every kid wants to be when they see this thing as an illegal download. More as it happens, but f*cking Hell. This is already about 350 times better than I could ever have expected. Everybody has a brief break from shooting this week before it all moves to Canada ten days down the line and then back here in a month. We’re shooting on the Star Wars stage at Elstree, which I can only take as a good omen.

The Marvel Comics’ Icon imprint book centers on a high school dweeb named Dave Lizewski who decides to become a superhero even though he has no athletic ability or coordination. Things change when he eventually runs into real bad guys with real weapons. Johnson plays title character, while Fonseca plays the object of the teen’s infatuation who believes Dave is gay. Cage is a former cop who wants to bring down a druglord and has trained his daughter (Chloe Moretz) to be a lethal weapon. 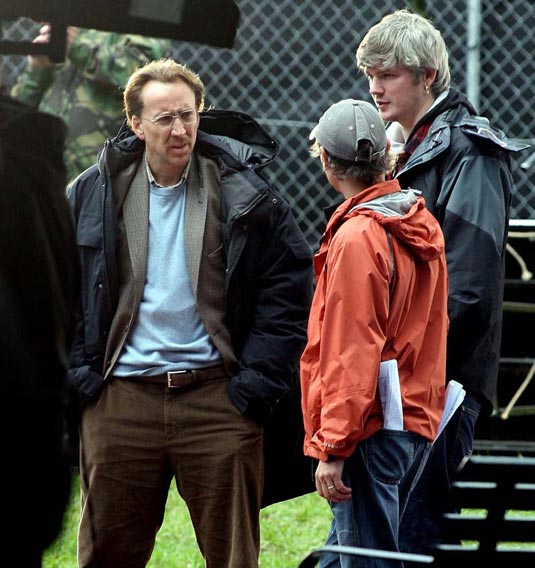