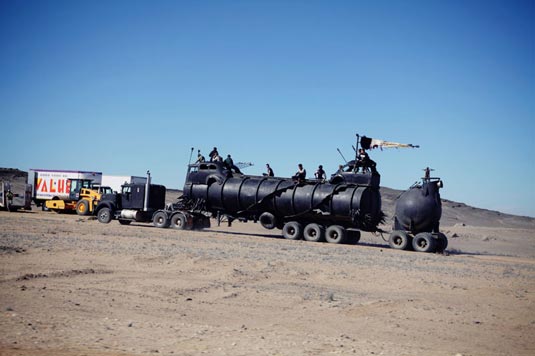 It’s been a while since we’ve heard anything about Mad Max: Fury Road, the fourth installment in George Miller’s worshipped franchise. This poor baby has been constantly plagued with production issues since the beginning and finally, more than ten years after the first take at it, it’s finally shooting. But not without more problems on the horizon. Miller has, in a manner quite typical for him, managed to go over the budget and fallen behind on the shooting schedule at the same time. Warner Bros. execs have been racing back and forth to Namibia, where the film’s being shot, in order to keep Miller on track. Now they’ve decided that it’s a huge pain in the neck so instead, they’re putting producer Denise Di Novi as a permanent overseer to Mad Max’s filming. Hopefully Di Novi can do a good job of watch-dogging the project without killing Miller’s vision. We wouldn’t want some butt-hurt Warner Bros. executives closing the shutters on the film, now would we? Considering they’ve already ‘wasted’ more than $100 million on it, that’s pretty unlikely, but still my paranoia keeps kicking in. If everything goes smoothly, Mad Max: Fury Road should be done shooting near the end of November. When it will hit theaters, however, is still a mystery, although Tom Hardy and Charlize Theron are confirmed for their roles of Mad Max and Imperator Furiosa, at least. What can I say, stay tuned.

Must Listen: Full Album Stream Of THE MAN WITH THE IRON FISTS Soundtrack!
David Fincher Wants Brad Pitt for his 20000 LEAGUES UNDER THE SEA Remake
Advertisement