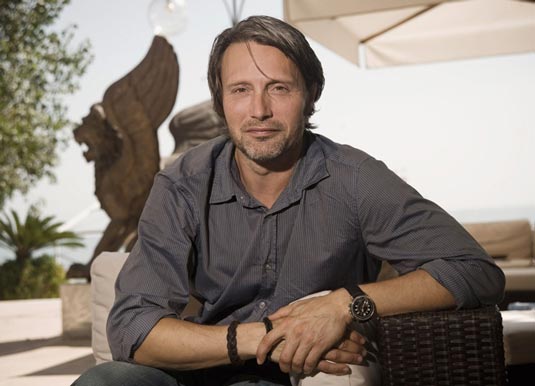 In addition to Iron Man 3, Marvel is also set to start filming another superhero sequel later this year: Thor: The Dark World. Chris Hemsworth, Natalie Portman, Anthony Hopkins, Idris Elba and Tom Hiddleston are all returning for their roles, and after an extensive director search that saw Patty Jenkins join and subsequently drop out of the project, Game of Thrones mastermind Alan Taylor is to take the helm (oooh, if he’s going to do it half as good as Game of Thrones, I’ll be puking rainbows out of sheer happiness!). Thanks to that, we now have our first new casting addition and it’s a big one: Mads Mikkelsen will be opposing Thor. The Casino Royale baddie-hottie is definitely in talks for a role in Thor 2, though it is still unknown WHAT role he will be playing. He might be best known for his villain role in the mentioned Casino Royale, but he also had a strong supporting one in Clash of the Titans, and starred in Valhalla Rising. Marvel Studios President Kevin Feige revealed that Thor 2 will shoot in London and that the film would have “another big villain” besides Loki. As far as the story goes, here’s what Feige said about the what the sequel will focus on: “Thor and Jane, to continue that dynamic. Really they were only together for three days, and do they love each other? Do they like each other? Do they know each other? We’re acknowledging that that love story in the first movie was sort of a quick crush, essentially, over the course of three quick days in the middle of the desert. And the relationship between Thor and Odin, which does change drastically as it did over the course of the first movie, and picks up and continues from there.” Now, I might be getting ahead of myself, but my guess for his role would be Gullin (Boar-god, Guardian of the Kingdom of Mirmir), Fafnir the Dragon or the Storm Giant of the same name, or… well, there aren’t that much male foes of Thor, if we’re sticking to the Norse mythology. If we’re not, it might be interesting, if Destroyer was introduced – especially because it is an enchanted suit of armor forged by ‘allfather’ Odin himself (according to the Marvel universe – no such thing in real Norse myths). Of course, this character is not exactly a ‘stand-alone’ – someone needs to maintain a mental connection for it/him to function. There is also Jormungandr (or Jormungand), or the Midgard Serpent – it seems somehow… too apocalyptic, knowing that they kill each other starting Ragnarok in that way, but then again it gives pretty nice space for an epic spectacle, if the script is done well (oh and, in that case they might add him the ability to shapeshift into human). Of course, in this scenario we could kiss subsequent installments goodbye. Damn. The more I think about it, the more possibilities. What is your guess?