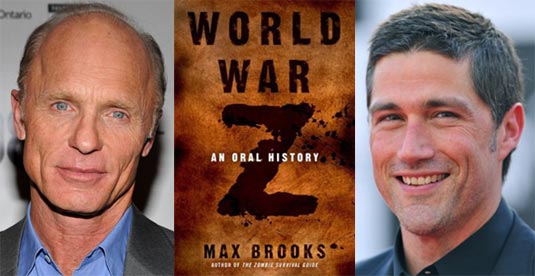 World War Z is an upcoming Marc Forster’s adaptation of Max Brooks’ zombie novel of the same name, and a project that we already wrote about.

But, today, we’re here for a little casting update, because we’ve just learned that Matthew Fox and Ed Harris will join the whole thing!

The cast of this movie is definitely getting bigger and I’m sure you all remember that World War Z already stars Brad Pitt, Mireille Enos, Anthony Mackie, Julia Levy-Boeken and James Badge Dale.

The screenplay was originally written by J. Michael Straczynski, and will be re-written by Matthew Michael Carnahan and as we previously said, we’ll soon have a chance to watch a zombie apocalypse from the first-hand accounts of those who survived it, and the project that will tell us the story of a man researching a zombie pandemic that killed a large amount of world’s population.

Brad Pitt is set to star as Gerard Lane, the interviewer who is collecting all the stories, Mireille Enos stars as his wife, character named Karin Lane, and as for the latest addition – Fox will play “Parajumper” while Harris role is currently unknown.

Here’s a little description of the novel once again: “Brooks tells the story of the world’s desperate battle against the zombie threat with a series of first-person accounts “as told to the author” by various characters around the world.

A Chinese doctor encounters one of the earliest zombie cases at a time when the Chinese government is ruthlessly suppressing any information about the outbreak that will soon spread across the globe. The tale then follows the outbreak via testimony of smugglers, intelligence officials, military personnel and many others who struggle to defeat the zombie menace.

Despite its implausible premise and choppy delivery, the novel is surprisingly hard to put down. The subtle, and not so subtle, jabs at various contemporary politicians and policies are an added bonus…”

World War Z is set to go into production this summer, with a budget of $125 million. As usual, make sure you stay tuned for more updates on this one!