Connect with us
Let’s continue with the presentation of the movies that will compete at 67th Venice Film Festival! 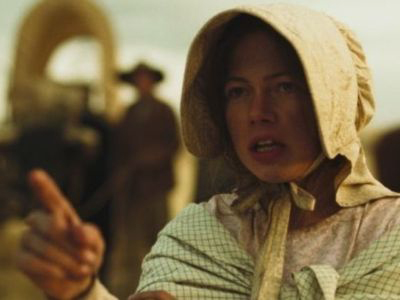 Next title is Meek’s Cutoff from director Kelly Reichardt, movie that’s already being described as “an eerie and disturbing film, a western, of sorts, and a bleak one.” Definitely something that deserves your attention, so make sure you check out the rest of this report… The movie is told from the women’s point of view, drawn from diaries kept by Western-bound pioneers, set up in 1845, the earliest days of the Oregon Trail, and a wagon team of three families has hired the mountain man Stephen Meek to guide them over the Cascade Mountains. Claiming to know a short cut, Meek leads the group on an unmarked path across the high desert plain, only to become lost in the dry rock and sage. Over the ensuing days, the emigrants must face the scourges of hunger, thirst and their own lack of faith in each other’s instincts for survival. When a Native American wanderer crosses their path, the emigrants are torn between their trust in a guide who has proven himself unreliable and a man who has always been seen as the natural enemy. “ Movie stars great Michelle Williams as Emily Tetherow, Bruce Greenwood, Will Patton, Zoe Kazan, Paul Dano and Shirley Henderson. Director Reichardt told reporters:”Just following a leader who doesn’t know what he’s doing, who’s maybe either ignorant or stupid. You are not really sure what his motives are. And needing information from someone who’s completely culturally different, and whose culture you don’t trust.” Let us just remind you that, Meek’s Cutoff is one of 22 films competing for the Golden Lion, plus one surprise movie still to be announced, to be awarded September 11, 2010. Take a look at Meek’s Cutoff red carpet and about one minute from the movie. [youtube]http://www.youtube.com/watch?v=l9mfmh7wGpc[/youtube]
Continue Reading
Advertisement
You may also like...
Related Topics:Bruce Greenwood, Michelle Williams, Paul Dano