Connect with us
So, we already know that Spider-Man reboot is coming. 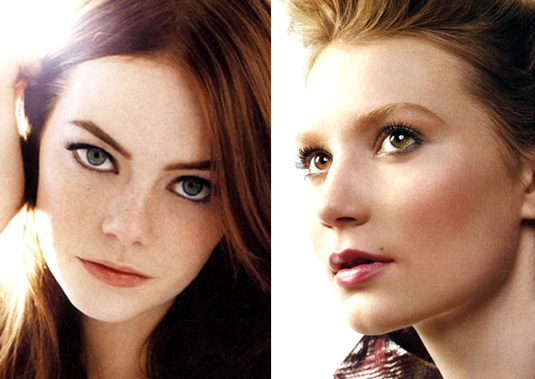 We also know that Andrew Garfield is set as Peter Parker, and we finally learned something more about the upcoming Mark Webb flick. Emma Stone and Mia Wasikowska are on the list of possibilities to play Pete’s eventual sweetie! According to reports, “the two actresses are now in the mix, and supposes that means the roles are classic romantic interests Mary Jane Watson and Gwen Stacy. The immediate conclusion to draw is that Emma Stone would be Mary Jane and Mia Wasikowska Gwen Stacy.” Let us also remind you that previous reported contenders include Mary Elizabeth Winstead, Imogen Poots, Teresa Palmer, Lilly Collins, Emma Roberts and Ophelia Lovibond. During the first planning of Spider-Man reboot, producers hinted that Mary Jane Watson would be gone. However, recent changes will include not one but two leading ladies for Peter Parker! Gwen Stacy is one of the leading ladies so the hunt is out for Watson’s role. Filming is scheduled to begin in December so the chosen actress or actresses will likely be announced soon. Stay tuned!
Continue Reading
Advertisement
You may also like...
Related Topics:Andrew Garfield, Emma Stone, Mia Wasikowska, Spider-Man