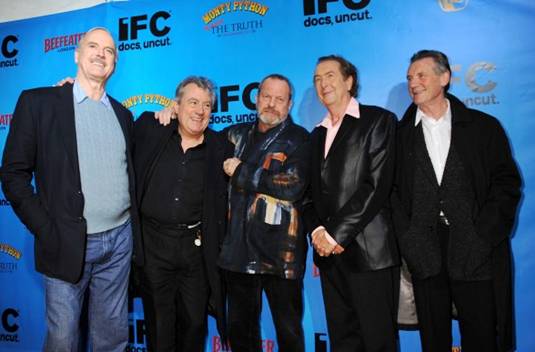 Members of the beloved Monty Python’s Flying Circus are set to return once more to the big screen together for Absolutely Anything, a sci-fi farce that will be a mixture of CGI and live action, with Terry Jones to direct and Mike Medavoy (Black Swan, Life of Brian) to produce. Flick about a group of naughty aliens who endow an earthling with the power to do ‘absolutely anything’ to see what would happen. Unable to handle his newfound abilities and because humans are so selfish and dumb and ignoring the advice from his talking dog named Dennis voiced by Robin Williams, chaos ensues. That sounds totally irrational and according to producer Chris Chesser:

It’s not a Monty Python picture, but it certainly has that sensibility. The film looks at the whole notion how funny unintended consequences can be. It’s the whole thing about the genie granting three wishes.

Jones wrote the script with The Mists of Avalon scribe Gavin Scott, which has been under development for the last two decades. Jones returning to directing features after has been largely absent ever since. John Cleese, Michael Palin and Terry Gilliam had agreed to lend their voices to the aliens and possibly other roles in true Python style. Eric Idle is still being persuaded to also star as well as Robin Williams who may voice Dennis the dog and the live-action role of a pretentious Inspector Clouseau type of Frenchman. Medavoy said:

Terry and Gavin have crafted a classic farce – something I feel I know a little bit about after all the ‘Pink Panther’ pictures we did with Blake Edwards at United Artists. In fact, the movie even has a pompous Frenchman reminiscent of Inspector Clouseau – but there the similarity ends. Like all projects originated by any of the Monty Python guys, ‘Absolutely Anything’ delightfully defies a logline.

Interview with The Showbiz 411