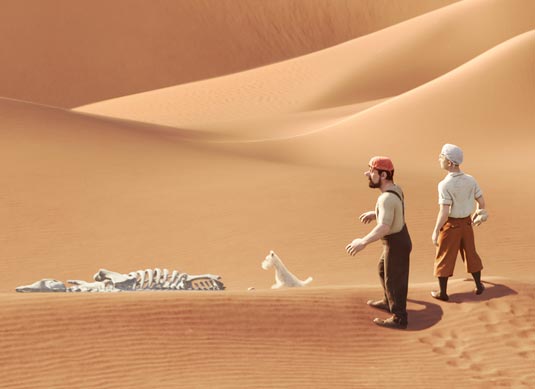 Today we have three new images from Steven Spielberg’s highly anticipated The Adventures of Tintin: The Secret of the Unicorn. The Adventures of Tintin: Secret of the Unicorn is the first in the series of 3D motion capture films based on the iconic character created by the Belgian artist Georges Rémi, better known to the world by his pen name Herge. The film will depict Tintin’s (Jamie Bell) first encounter with Captain Haddock (Andy Serkis) and the discovery of a clue to the treasure of his ancestor Sir Francis Haddock. They set out to find it with protection from a prison escapee who tried to get the treasure as well as Detectives Thomson (Nick Frost) and Thompson (Simon Pegg).

The screenplay was penned by Edgar Wright (Scott Pilgrim vs. the World), Joe Cornish (Ant-Man) and Steven Moffat (Doctor Who) and co-stars Daniel Craig as Red Rackham, Toby Jones as Silk, Mackenzie Crook as Ernie, Tony Curran as Lt. Delcourt, Cary Elwes as Pilot and Gad Elmaleh as Ben Salaad. The Adventures of Tintin: Secret of the Unicorn, produced by Peter Jackson, comes to theaters December 23rd, 2011.