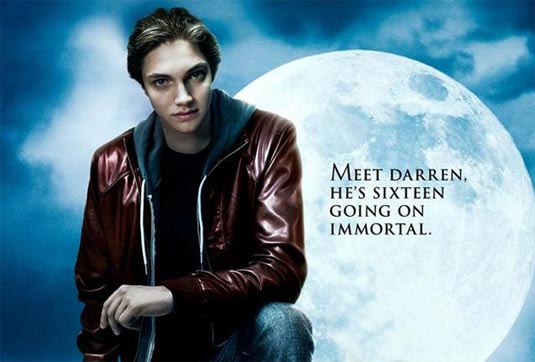 The poster for “Cirque du Freak: The Vampire’s Assitant” has just been released. “Cirque Du Freak: The Vampire’s Assistant,” based on the popular series of books by Darren Shan, is a fantasy-adventure about a teenager who unknowingly breaks a 200-year-old truce between two warring factions of vampires. Pulled into a fantastic life of misunderstood sideshow freaks and grotesque creatures of the night, one teen will vanish from the safety of a boring existence and fulfill his destiny in a place drawn from nightmares. The film is directed by Paul Weitz (American Pie, Down to Earth, In Good Company, About a Boy), the brother of New Moon director Chris Weitz. Stars John C. Reilly (Magnolia, Chicago, The Aviator, Walk Hard: The Dewey Cox Story), Ray Stevenson (The Punisher, King Arthur), Josh Hutcherson (Journey to the Center of the Earth), Salma Hayek (Desperado, Fools Rush In, Frida), Willem Dafoe (Platoon, Shadow of the Vampire, Spider-Man) and Ken Watanabe (The Last Samurai, Letters from Iwo Jima). “Cirque Du Freak: The Vampire’s Assistant” is scheduled for US release on 23rd October 2009.