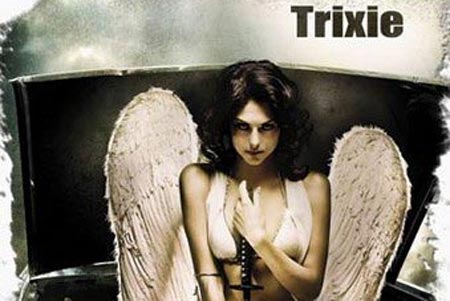 Nine new posters for the upcoming Rick Jacobson‘s action film “Bitch Slap” have been released “Bitch Slap” follows three bad girls (a down-and-out stripper, a drug-running killer and a corporate powerbroker) as they arrive at a remote desert hideaway to extort massive booty from a ruthless underworld kingpin. Things quickly spin out of control as allegiances change, truths are revealed, other criminals arrive for the score, the fate of the world hangs in the balance and they are forced to confront a villain much worse than they ever expected… themselves. It’s the ultimate morality tale as, one by one, they realize the whole “she-bang” was a set-up and one of the film’s characters may not even be human… “Bitch Slap” starring Lucy Lawless (Xena: Warrior Princess), Kevin Sorbo (Never Cry Werewolf), Renee O’Connor (Boogeyman 2) and America Olivo (General Hospital). The film is due out late 2008 (the trailer says Christmas, although the IMDb indicates early 2009).