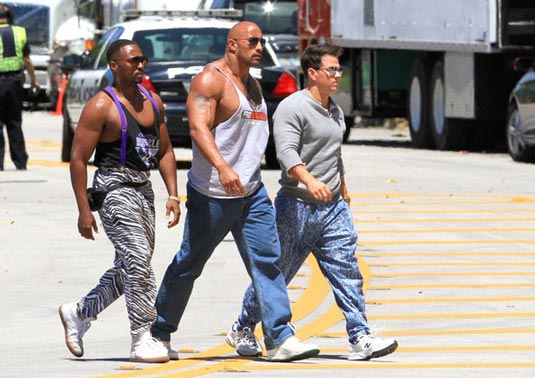 Here’s a TV spot for Michael Bay‘s Pain and Gain, which stars Mark Wahlberg, Anthony Mackie and Dwayne Johnson. After seeing the trailer, I can safely say that this is one Michael Bay movie I am actually looking forward to seeing, because I really love the mix of comedy and action, and I like seeing Wahlberg and The Rock – I’m also curious as to how the two will play it out. Have a look for yourself: Synopsis: From acclaimed director Michael Bay comes “Pain & Gain,” a new action comedy starring Mark Wahlberg, Dwayne Johnson and Anthony Mackie. Based on the unbelievable true story of three personal trainers in 1990s Miami who, in pursuit of the American Dream, get caught up in a criminal enterprise that goes horribly wrong. The film is based on magazine articles by Pete Collins, with a screenplay by Christopher Markus & Stephen McFeely and produced by Donald DeLine, Michael Bay and Ian Bryce. The film  also stars Ed Harris, Rob Corddry, Tony Shalhoub, Bar Paly, Rebel Wilson, Ken Jeong and Yolanthe Cabau, and hits the theaters on April 26th, 2013.