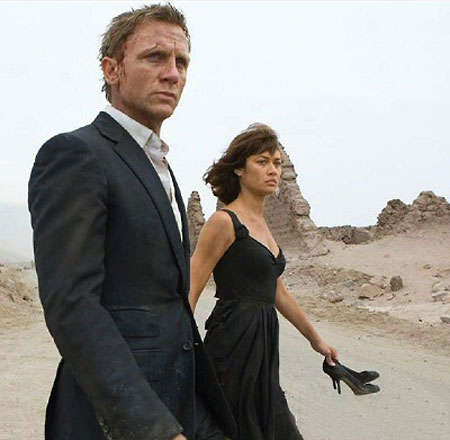 Shorter and more action packed, Quantum of Solace is a James Bond film for the new millennium. Unlike Brosnan’s swan song Die Another Day, the CGI is limited, and unlike Casino Royale the film doesn’t try to be too hip and trendy. From the pulsating opening car chase – you know that you are watching Bond, and like the older movies in the series you feel that it is the end of another adventure (it is) and not a piece of grandstanding from the second unit and stunt departments…full story [Screen Rant] Be prepared for a few changes in this new entry of the Bond canon. James Bond is back, and this time it’s extremely personal. The rugged, harsh, and rough agent picks up exactly where he left off in another striking thriller that leaves you feeling exhausted, if not exhilarated…full story [Blogger News] Britain’s Gemma Arterton plays Agent Fields; she greets 007 wearing a trenchcoat with apparently little underneath, like some sort of MI6 strippogram. And she is the recipient of his ardour in the luxury hotel suite – that quintessential Bond habitat. This movie is, in fact, a reminder of how vital hotels are in Bond films, providing the essential narrative grammar: the checking in, the fight with the stranger in the room, the messages left at reception, the luxury cars lovingly photographed outside…full story [Guardian] he villain in this latest installment is very effective. He’s one of the few, in fact if I’m not mistaken the only, Bond villain to not have some sort of gimmick to his persona. There’s no bleeding eye, no scar, no limp, no white cat; this is just a guy who’s very intelligent, exacting, and who knows what he wants. In that way he’s not the most intimidating of the repertoire of Bond villains, and subsequently not the most memorable, but I liked the way they handled the required “bad guy”. He’s played by Mathieu Amalric, who you may recognise from the absolutely wonderful The Diving Bell and the Butterfly. I wouldn’t have mentioned his name before he was chosen but once it was thrown into the mix it just seemed to “click”…full story [BlogCritics] James, of course, is still hung up over the betrayal and demise of Vesper in the last instalment, motivating a morose six-martini binge while he’s flying across the Atlantic, as well as his avoidance here of any serious entanglements, save those in stray lengths of rope dangling from the roofs of Tuscan churches. He isn’t alone: Camille, having had her family raped and burnt alive by a deposed Bolivian dictator, also has her mind on other things. Instead, there’s a just-for-fun fling with MI6 emissary Gemma Arterton, who pitches up looking like a John le Carré strippogram in a trenchcoat, and exits in a homage to Shirley Goldfinger Eaton which had me reaching for bad oil puns. Crude? Unrefined? It’s not exactly slick…full story [Telegraph.co.uk]
Continue Reading
Advertisement
You may also like...
Related Topics:Gemma Arterton, James Bond, Quantum of Solace