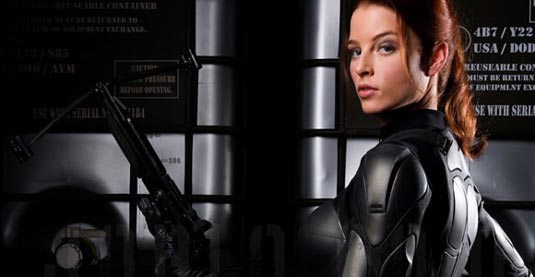 Actress Rachel Nichols (G.I. Joe: The Rise of Cobra) has signed on to star in The Ten O’Clock People, an adaptation of Stephen King’s short story. We reported recently that Tom Holland (Fright Night, Child’s Play) is adapting this short story and will also be directing (his last feature was also a Stephen King adaptation, the 1996 thriller Thinner). The story follows Brandon Pearson (Justin Long), a Boston (and for once, it isn’t in MAINE) man who is trying to quit smoking. While he tries to kick the habit, he makes the terrifying discovery that many authority figures are actually monsters, hiding in plain sight. Rachel Nichols will play a woman who can also see these creatures. Nathaniel Kramer and E.J. Meyers are producing for Making Ten O’Clock Productions. No production schedule was given, as of yet. The Ten O’Clock People comes to theaters in 2013. Stay tuned for updates!
Continue Reading
Advertisement
You may also like...
Related Topics:Fright Night, G.I. Joe: The Rise of Cobra, justin long, Rachel Nichols, Stephen King, The Ten O'Clock People, Tom Holland