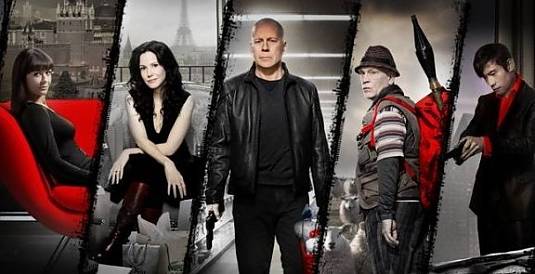 Not everything is red in the upcoming Red 2! Seven new international (read: South Korean) character posters have arrived, and as you’re about to see in the rest of this report – they’re all black & red, with some pretty cool taglines. Willis is so strong, Malkovich is so psycho, Zeta-Jones is so hot, Mirren is so cool, Byung-hun is so simple, Parker is so excited and Hopkins is… well, so crazy!

Director Dean Parisot stands behind the sequel to the 2010 Red, which revolves around retired black-ops CIA agent Frank Moses who reunites his unlikely team of elite operatives for a global quest to track down a missing portable nuclear device.

And you already know the rest of the story – whenever we have the next-generation weapon, we also have some ruthless terrorists, assassins and power-crazed greedy government officials.

So, the above mentioned retired team will once again have to try to save the world, only this time – they travel to Paris, London and Moscow, and the only thing they have is their cunning wits, their old-school skills, and each other to rely.

Make sure you click on all these posters to take a better look, and in case you’ve missed our previous reports – the first trailer and more character posters are waiting for you right here on our site!