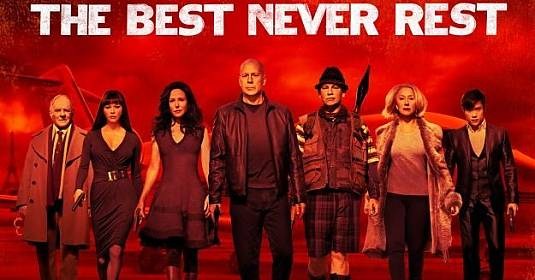 Take another look at retired, but extremely dangerous team ’cause a brand new poster for RED 2 has arrived! Nothing spectacular, I know, but Frank Moses and his team of elite operatives want you to know that the best never rest. That’s exactly what Dean Parisot‘s upcoming high-octane action comedy is all about…

Written by Jon and Erich Hoeber, the sequel to the 2010 RED will once again center on a retired black-ops CIA agent, played by Bruce Willis, who reunites his unlikely team of elite operatives for a global quest to track down a missing portable nuclear device.

In case you’ve missed the rest of the story:

To succeed, they’ll need to survive an army of relentless assassins, ruthless terrorists and power-crazed government officials, all eager to get their hands on the next-generation weapon. The mission takes Frank and his motley crew to Paris, London and Moscow. Outgunned and outmanned, they have only their cunning wits, their old-school skills, and each other to rely on as they try to save the world-and stay alive in the process.