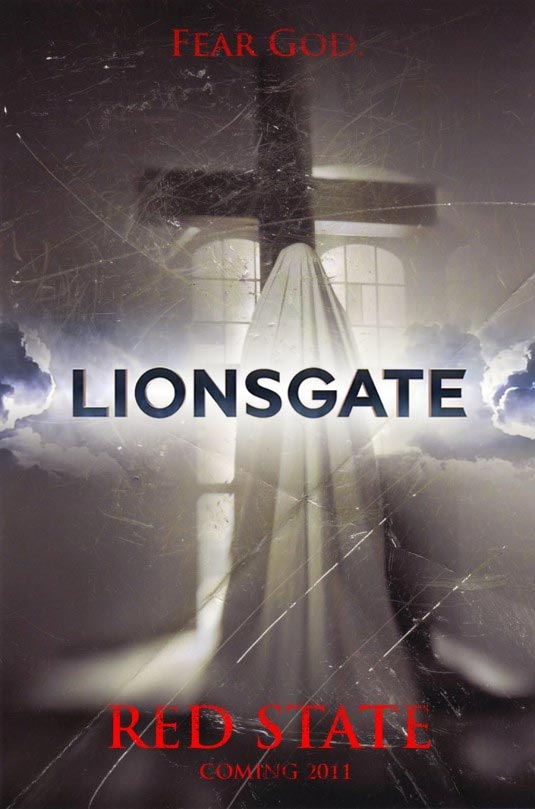 Under the terms of the arrangement, Lionsgate obtains the rights to distribute the title on all packaged media, Video-On-Demand (VOD), Subscription Video-On-Demand (SVOD), Electronic Sell-Through (EST) and Television in the United States, while SModcast has retained the theatrical distribution rights throughout the US. Under the guidance of marketing and distribution executive David Dinerstein, Smith’s self-distribution label SModcast Pictures and Lionsgate Films have devised a multi-tier release strategy unlike any independent film to date. The film is scheduled to release on multiple platforms this September followed by packaged media before the end of the year.

Written and directed by Kevin Smith and produced by Jonathan Gordon, RED STATE stars 2011 Academy Award® winner for Best Actress Melissa Leo and Emmy® winner John Goodman, plus Kyle Gallner and Michael Parks. The film debuted at this year’s Sundance Film Festival to much notoriety when Smith ended studio bidding by buying his own film for $20 and declaring he would be self-distributing the film theatrically. Smith has since toured the film around the country to enthusiastic audiences, grossing close to $1 million to date at the US box office from only 15 single show engagements. SModcast spent less than $500 in paid advertising to support the tour which kicked off at Radio City Music Hall on March 5th and grossed $162,000 during one show. It quietly topped the per screen average charts for three weekends, becoming the 10th best per screen average film of all time.

“Kevin has proven he knows how to mobilize his fan base surrounding the launch of his movies,” said Packer. “There has been great anticipation for RED STATE for almost a year. Although we could not participate in the innovative theatrical release, we are thrilled to bring his film to a wider audience this fall in VOD/Digital and packaged media. We expect that Kevin’s passion, combined with the talented cast and ongoing buzz, will ensure a successful fall launch.”

“Before we decided to release RED STATE ourselves, Lionsgate was the ONLY distributor we hoped would buy the flick at Sundance,” said Smith. “They understood The Harvey Boys commitment to a non-traditional theatrical release, and now embrace RED STATE like it is their own. And we’ve embraced the Gate as essential partners who’ll run RED on Video-On-Demand and Blu-Ray. This company crushed it with DOGMA back in ’99 and ever since, they’ve been able to punch through always-crowded cineplexes with the most responsible marketing budgets in the industry. My flick is my art and my art is like my child; and I feel safe letting Lionsgate babysit my kid.”

RED STATE tells the story of a group of teens in Middle America who receive an online invitation for sex, but soon encounter fundamentalists with a much more sinister agenda. The movie is the latest release from Smith to be added to the Lionsgate library as the studio obtained the home entertainment distribution rights to Smith classics CHASING AMY, CLERKS and JAY AND SILENT BOB STRIKE BACK through its recent acquisition of the Miramax catalog.

In case you haven’t already watched it, check out Red State trailer.