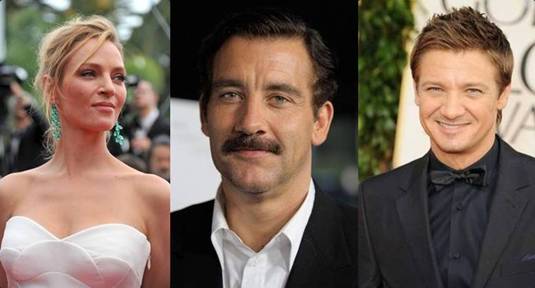 There was a phrase in the WW II, “Loose Talk Costs Lives”. Now I heard producers around the Croisette performed such talks last week. A sort of, but not exactly like last year when Amy Adams was attached to the original version of John Hillcoat’s The Wettest County, which has momentarily died then yep come back to life this year. Well, Uma Thurman and Clive Owen are reportedly in talks to star in the drama movie Blind. The film circles around a novelist (probably Owen) who was blinded in a car crash that killed his wife and several years later rediscovers his passion for life and writing when he embarks on an affair with the neglected wife (presumably Thurman) of an accused businessman. Norman Mailer‘s son, John Buffalo Mailer, wrote the screenplay. Oops, I almost forgot to mention fabulous Jeremy Renner. Two times Academy Award nominated actor who appears in a slew of other A-list projects (The Bourne Legacy, Mission: Impossible 4), was offered a lead role in a female-driven drama called You’re Not You. Producer of this female-centered project is Molly Smith known from previous dramedy Something Borrowed. Hilary Swank was already attached. It sounds kind of thin. Next, helmers Radu Mihaileanu (The Concert) and Guillaume Canet (Tell No One) will direct their English-language debuts with France’s Les Productions du Tresor. Canet has written the screenplay for what’s described as an “expensive” movie set in the U.S and France, in English and French, with thesps from both sides. Mark Pellington will be helming Liev Schreiber and Alice Eve in a psycho thriller titled Story/Teller. The story appears to be set on a “world of secrets, guilt and paranoia.” But wait, there’s even more. Derek Luke and Lindsay Sloane have teamed up for the project Seeking a Friend for the End of the World, Rabbit Hole thesp Miles Teller will topline 21 And Over, directed by The Hangover writers Jon Lucas and Scott Moore, 300 screenwriter Kurt Johnstad has been drafted to rewrite the script for James Mangold‘s The Gunslinger, French comedian Dany Boon and German actress Diane Kruger have joined the high-concept action-adventure comedy Fly Me To The Moon, helmed by Pascal Chaumeil, and lastly, Darren Bousman (Saw) is going direct horror flick being described as a The Shining-style called The Barrens. And this is just a taste. Imagine how awesome news to come out of Cannes this week. Follow us on Twitter.
Continue Reading
Advertisement
You may also like...
Related Topics:Clive Owen, Derek Luke, Guillaume Canet, Hilary Swank, James Mangold, Jeremy Renner, John Hillcoat, Kurt Johnstad, Mark Pellington, Scott Moore, Seeking a Friend for the End of the World, Uma Thurman