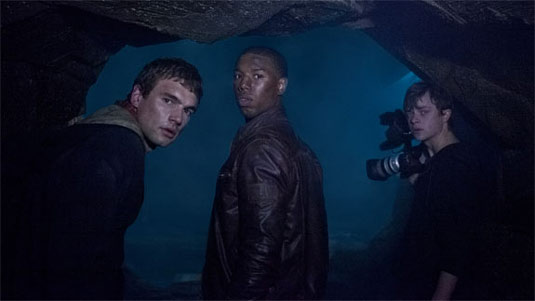 It all started with fun and yes, with Jessie J’ Price Tag. But apparently things are going to get really bad. 20th Century Fox has released a new one, shorter than previous, 60-second trailer for Josh Trank‘s sci-fi thriller Chronicle. And that’s not all. We also have one really short but creepy, if for no other reason than because a spider, clip from the movie. Michael B. Jordan, Dane DeHaan and Alex Russell star as the teenage super power trio. They suddenly gain superpowers from a mysterious substance. Soon after getting their powers, things take a dark turn and the boys begin to lose control, pulling more and more dangerous pranks. So, the chronicle of their ordinary lives is about to take on extraordinary turn. The rest of cast includes Anna Wood, Ashley Hinshaw, Joe Vaz, Luke Tyler, Matthew Dylan Roberts and Michael Kelly. Chronicle is set to open on February 3rd, 2012. [youtube width=”535″ height=”350″]http://www.youtube.com/watch?v=6Zo2x_2I34c[/youtube]
Continue Reading
Advertisement
You may also like...
Related Topics:Alex Russell, Chronicle, Dane DeHaan, Josh Trank, Michael B. Jordan