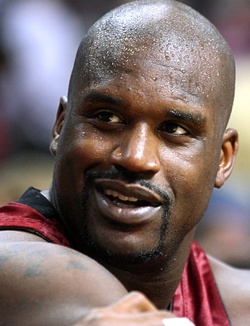 We already had a little chat about the upcoming Adam Sandler comedy titled Jack and Jill, so you know that Al Pacino and Katie Holmes are already involved in the whole thing. But today, we’re here to add another name on that cast list, because Shaquille O’Neal will appear as himself in the project as well! Jack and Jill centers on a lady named Jill (Sandler), who turns up at her twin brother Jack’s (Sandler) Thanksgiving dinner and then won’t leave. This means that Sandler will play both Jack and Jill, and on the other hand, Holmes would play his wife, while Pacino would star as himself. Shaq, as we said, is set to make “a very small cameo” in the film (and we very well know that Shaq has played Shaq in CB4, Good Burger, He Got Game, After the Sunset, The Kid & I, The House Bunny, and When in Rome). The script has been penned by Steve Koren, Robert Smigel and Ben Zook, and Dennis Dugan will be in charge for directing the comedy for Columbia Pictures. Sandler and Dugan previously worked together on Happy Gilmore, Big Daddy, I Now Pronounce You Chuck & Larry, You Don’t Mess With the Zohan and Grown Ups.
Continue Reading
Advertisement
You may also like...
Related Topics:Adam Sandler, Al Pacino, Dennis Dugan, Jack and Jill, Katie Holmes