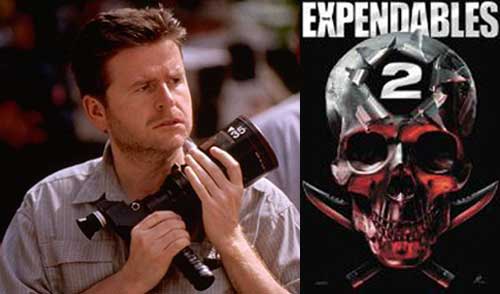 Well, guess what, it looks that Sylvester Stallone will not be the director of The Expendables 2 after all. So relax!

We’ve just learned that Simon West will have an honor to direct the whole thing.

I’m sure you’ll all agree that he’s not a bad choice at all, especially when it comes to action genre. I mean, he’s the man behind titles like Con Air, The Mechanic and Lara Croft: Tomb Raider.

As you probably already know, the sequel is expected to have back an original cast that includes Sylvester Stallone, Jason Statham, Dolph Lundgren, Mickey Rourke, Terry Crews, Jet Li and possibly Bruce Willis.

Unfortunately, at this moment still no words on The Expendables 2 possible plot. Actually, we posted synopsis released by NuImage but Stallone says that it’s wrong, and that a real, updated storyline will soon be released.

David Agosto and Ken Kaufman are writing this one.

But thanks to Deadline we do know that production will begin this summer. The film’s produced by Millennium Films.

At the end, let us remind you that Stallone directed the original movie, which grossed $275 million worldwide, $103 million domestic.

Lionsgate is set to release The Expendables 2 on August 17th, 2012.

We’ll keep an eye on it, stay tuned!