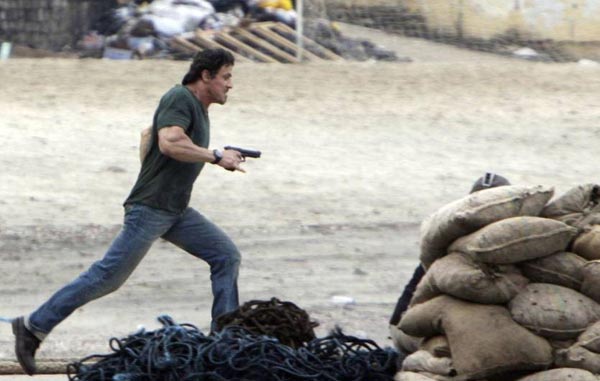 The guys at SpoilerTV got the first few photos of Sylvester Stallone in action, doing some stunt work on the set of “The Expendables” in Rio de Janeiro. “The Expendables” is about a team of mercenaries led by Barney Ross (Stallone) head to South America on a mission to overthrow a dictator. The team consists of Lee Christmas (Jason Statham), Bao (Jet Li), Gunnar Jensen (Dolph Lundgren), and Emanuel (Mickey Rourke), who head to South America on a mission to overthrow a dictator. “It’s a 1980s movie with today’s technology. But in those days, the female leading character was a helpless girl, waiting to be rescued by the hero. Now we have a very strong female character that evolved to this form while I was writing the script. But except for this, yes, it’s a 1980s movie,” said Sly who is writer and director of the movie. Randy Couture,  50 Cent, Steve Austin, Terry Crews, and Charisma Carpenter aslo stars the movie which is due to hit theaters on April, 23, 2010.