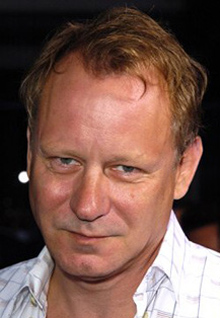 Stellan Skarsgard, a Swedish born actor, best known for his roles in Angeles & Demons and Pirates of the Caribbean is in talks to play Martin Vanger in David Fincher’s adaptation of Stieg Larsson’s The Girl With The Dragon Tattoo. Quite interesting choice for Skarsgard who will star as Martin Vanger, President of the family’s multi-generational company and a key suspect in the disappearance of young Harriet in a story that goes like this: “Forty years ago, Harriet Vanger disappeared from a family gathering on the island owned and inhabited by the powerful Vanger clan. Her body was never found, yet her beloved uncle is convinced it was murder and that the killer is a member of his own tightly knit but dysfunctional family. He employs disgraced financial journalist Mikael Blomkvist and the tattooed and troubled but resourceful computer hacker Lisbeth Salander to investigate. When the pair link Harriets disappearance to a number of grotesque murders from almost forty years ago, they begin to unravel a dark and appalling family history. But the Vangers are a secretive clan, and Blomkvist and Salander are about to find out just how far they are prepared to go to protect themselves.” “I’ve met Fincher; I want to work with him; he wants to work me. I’ve had a concrete offer, and now we are in negotiations. The contract is for the period September to March, but I don’t know yet when I am supposed to start my part of the film,” Skarsgard said. Let us remind you that The Girl With The Dragon Tattoo release date is December 21, 2011, and that movie already stars Daniel Craig as journalist Mikael Blomkvist and Robin Wright Penn as a publisher of crusading finance magazine Millennium – Erika Berger. The leading female character Lisbeth Salander still remains mystery.
Continue Reading
Advertisement
You may also like...
Related Topics:Daniel Craig, David Fincher, Robin Wright Penn, Stellan Skarsgard, Stieg Larsson, The Girl With The Dragon Tattoo