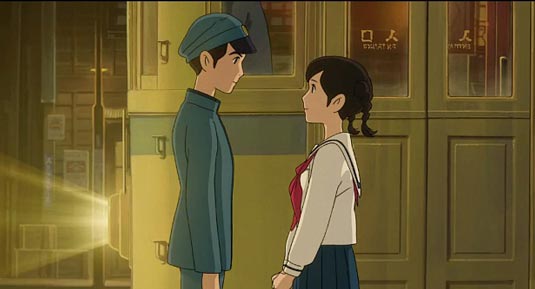 The Academy of Motion Picture Arts and Sciences has announced the list of 21 animated movie submitted to be considered for a Best Animated Film Oscar. According to Gkids, they would be doing that work to make sure that the Hayao Miyazaki‘s From Up on Poppy Hill would get recognized, and they’ve followed through, making sure that Studio Ghibli’s latest is in the thick of things. Renowned and recently awarded with Person of Cultural Merit prize director wrote the screenplay for the shoujo manga adaptation, while his son Goro Miyazaki directed. GKids recently tweeted “theatrical release for #poppyhill is March 15 in NY and LA, with more cities opening every week after that.” The other animated feature to be submitted is religious group Happy Science’ The Mystical Laws. The full list of submitted films include: Adventures in Zambezia Brave Delhi Safari Dr. Seuss’ The Lorax Frankenweenie From Up on Poppy Hill Hey Krishna Hotel Transylvania Ice Age Continental Drift A Liar’s Autobiography: The Untrue Story of Monty Python’s Graham Chapman Madagascar 3: Europe’s Most Wanted The Mystical Laws The Painting ParaNorman The Pirates! Band of Misfits The Rabbi’s Cat Rise of the Guardians Secret of the Wings Walter & Tandoori’s Christmas Wreck-It Ralph Zarafa Several of the films listed have not yet had their required Los Angeles qualifying runs. Submitted features must fulfill the theatrical release requirements and comply with all of the category’s other qualifying rules before they can advance in the voting process. At least eight eligible animated features must be theatrically released in Los Angeles County within the calendar year for this category to be activated. The 85th Academy Awards nominations will be announced live on Thursday, January 10th, 2013, at 5:30 a.m. PT in the Academy’s Samuel Goldwyn Theater.
Continue Reading
Advertisement
You may also like...
Related Topics:From Up on Poppy Hill