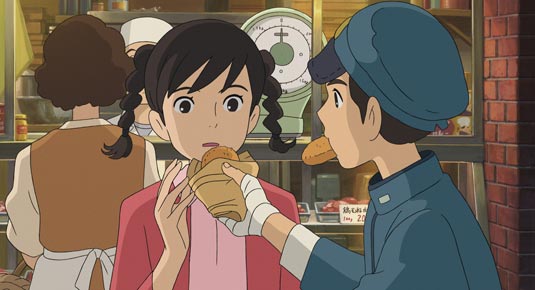 The Amherst Cinema in Amherst, Massachusetts will screen seven Studio Ghibli films, including From Up on Poppy Hill, in March-April as a part of the theater’s “Miyazaki Festival.” The festival will also screen Castle in the Sky, Howl’s Moving Castle, My Neighbor Totoro, Nausicaä of the Valley of the Wind, Princess Mononoke and Spirited Away in Japanese with English subtitles.

The film follows a group of Yokohama teens in their quest against a wrecking ball that threatens to destroy their school’s clubhouse in preparation for the 1964 Tokyo Olympics.

North American distributor GKids has acquired the rights the film. GKids will screen the film in Los Angeles and New York on March 15th, 2013. “Big cities” will then receive the film in the following two weeks, and still more cities the week after. GKids will then release From Up on Poppy Hill on Blu-ray Disc and DVD.

The film was submitted for an Oscar nomination, and was shortlisted for a Golden Globe nomination, but it did not make either of the final nomination lists. The film has also been nominated for an Annie Award.

Continue Reading
Advertisement
You may also like...
Related Topics:Annie, From Up on Poppy Hill, Studio Ghibli