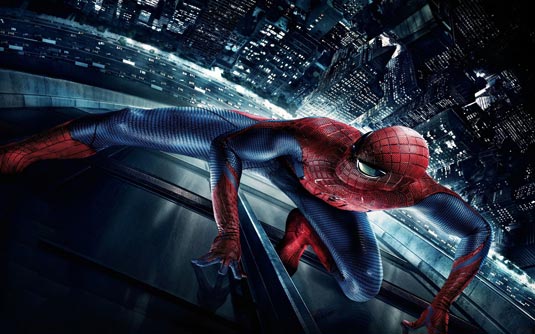 Rumors about Peter Parker (Andrew Garfield) getting a slight costume makeover in The Amazing Spider-Man 2 were accompanied shortly by confirmation from director Marc Webb. He later revealed an image of mask lens with curled upper-corners, resembling the Spidey’s classic comic book design (illustrated by Steve Ditko), as well as the character’s more contemporary ‘Ultimate Spider-Man’ comic book appearance. There was some inconsistency over similarities to masks worn by other Spider-Man characters (including, a villain rumored to be introduced in Webb’s sequel), but we now have confirmation those are part of Pete’s re-designed costume. We should get to see other elements, like the “gnarly webshooters” Webb promised, soon enough – no matter how loud we might cry out for them NOT to appear. Here is the Spidey’s mask in Amazing Spider-Man 2, thanks to Coming Soon – click for bigger pic:

Pete definitely has motivation for upgrading his gear, for more reasons than just Lizard tearing his previous costume in shreds during their showdown. He’s facing – at least – two villains this time, including the admiring spectator Max Dillion (Oscar-winner Jamie Foxx) who becomes Electro, and Oscar-nominee Paul Giamatti, playing that dangerous genetic experiment known as Rhino. Dane DeHaan (Chronicle) also joins the cast as Pete’s old friend Harry Osborn, a role for which he told the New York Times “Right now it’s just about getting all my work done and bulking up a little bit. I’ll start shooting fairly soon in New York.” He then explained:

“I work out incredibly intensely six days a week and I eat every two hours. Mostly proteins and veggies. I consume at least 3,000 calories a day. I’ve already gained seven pounds in six weeks!… It is [a lot] for me! I weigh more right now than I’ve ever weighed in my whole life. I’ve always constantly had trouble putting on weight, so it’s actually a whole lot for me.”

Before he signed on, Sony was checking out candidates with “athletic body and good looks” for the role, possibly explaining DeHaan sculpting his physique. But shouldn’t a more conventionally attractive Harry have less reason to be jealous of Pete? And could those bad feelings eventually manifest themselves as something terrible (duh, a Harry Osborn as Venom storyline) somewhere down the road? Think on it. The Amazing Spider-Man 2 is based on a screenplay from Alex Kurtzman, Roberto Orci and Jeff Pinker, with a first draft by James Vanderbilt. It also stars Emma Stone, Shailene Woodley, Colm Feore and Sally Field, and it hits the theaters on May 2nd, 2014.
Continue Reading
Advertisement
You may also like...
Related Topics:Alex Kurtzman, Andrew Garfield, Colm Feore, Dane DeHaan, Emma Stone, james vanderbilt, Jamie Foxx, Marc Webb, Paul Giamatti, Roberto Orci, Sally Field, Shailene Woodley, The Amazing Spider-Man 2