Focus Features has just sent over a new photos from their upcoming comedy The Kids Are All Right starring Julianne Moore, Mark Ruffalo, Annette Bening, Josh Hutcherson and Mia Wasikowska. The Kids Are All Right is the heartfelt new comedy from acclaimed director Lisa Cholodenko.  Two teenaged children (Alice in Wonderland’s Mia Wasikowska and Journey to the Center of the Earth’s Josh Hutcherson) get the notion to seek out their biological father and introduce him into the family life that their two mothers (Bening and Moore) have built for them. Once the donor (Ruffalo) is found, the household will never be the same, as family ties are defined, re—defined, and re—re—defined. The New York Times raves that it’s “a generous, nearly note—perfect portrait of a modern family,” and Entertainment Weekly calls the movie “funny, smart and sexy!” 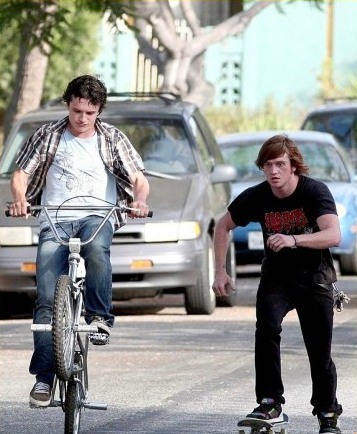 The Kids Are All Right, Josh Hutcherson (Laser) and Eddie Hassell (Clay)

The Kids Are All Right Photos